We are a global long-short fund manager, and in respect of both the long and the short side of the portfolio we are looking at business fundamentals and a catalyst to highlight those fundamentals.

We are a global long-short fund manager, and in respect of both the long and the short side of the portfolio we are looking at business fundamentals and a catalyst to highlight those fundamentals. One of our short positions is Peloton, which is testament of what we look for in a short: declining growth with industry headwinds, questionable management, and overpriced valuations.

Back in November we posted a wire on our short position in Peloton.  The article discussed our valuation concerns and various headwind catalysts that supported our short position and attribute to what we look for in our short calls.   Since then, the stock is down a further 45% and last week it made a new low of $23.25.

While the negative catalysts we had identified played out into further stock weakness, Peloton was negatively featured in the latest season of Sex & the City where main character ‘Mr Big’ dies from a heart attack riding his Peloton.  The stock fell 11% on the Thursday when the new episode dropped, and another 5% on Friday.  Management then scrambled over the weekend and miraculously produced a TV ad featuring ‘Mr Big’ actor Chris Noth and Ryan Reynolds voice over announcing the benefits of Peloton riding:

“And just like that, the world was reminded that regular cycling stimulates and improves your heart, lungs and circulation, reducing your risk of cardiovascular diseases. Cycling strengthens your heart muscles, lowers resting pulse and reduces blood fat levels. … He’s alive.”

The ad was pulled down only several days after the resuscitation of the brand but was tarnished yet again on reports of sexual assault against the actor Chris Noth.

Also, around this time, Lululemon who owns an alternative home interactive fitness product ‘Mirror’ cut their full-year revenue forecast for the product to $125 million to $130 million, down from its June estimate for a range of $250 million and $275 million.  That’s right… a whopping 50% cut!  This further cemented our view that home fitness was on the decline and had mostly benefitted from splurged buying during global lockdowns.

With all this happening we covered our position in early January at $34, booking in a profit of 70%.  We reasoned that the headwinds were well known, and the stock had declined so much in a short period of time that any positive news would likely cause the stock soaring.  Overly optimistic street coverage was something we were critical of in our short call, and we felt the street was now getting more realistic with their expectations.  Analysts in recent weeks had been cutting expectations for Peloton’s second quarter as well as price targets for the stock, projecting that Peloton had a weak holiday.

Admittedly, we were a little bit early in our short cover as last week the stock fell another 10% on reports that the company was halting production of their products due to “a more challenging post-Covid demand environment” and was making layoffs in several of its sales division. 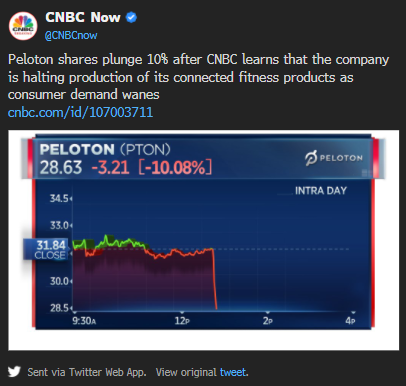 What went mostly unnoticed though that beginning Jan. 31, the company will be asking customers to pay an additional $250 for delivery and setup for its Bike, and an additional $350 for its Tread, according to a banner on its website.  That will bring the costs for those products up to $1,745 and $2,845, respectively.  While prices for goods and services are generally rising, we question this strategy for Peloton will hinder sales rather than help maintain margins.

We never had thought nor suggested that Peloton was a ‘zero’, a company headed for bankruptcy.  In fact, we stated that it “was great product for a niche market and although we think it unlikely, a takeover target as an entry into the connected fitness business”.  We think at current levels the stock is somewhat tempting, trading at 2x 2022 Sales, down from 5.5x in November.

Yes, it’s an exercise bike with an iPad that takes up space in homes, but it’s also a live content company, and ‘content is king’ at the end of the day.  We just think management at Peloton need to focus on their niche market instead of striving to be a mainstream gym-killer.

Activist investor Blackwells Capital LLC appears to agree, after building a stake of ~5% the fund is calling for a sale and to fire the founder CEO John Foley, who sold $119m in shares above $110 per share in 2020.    Note Total insider selling last year was $496m from company insiders. 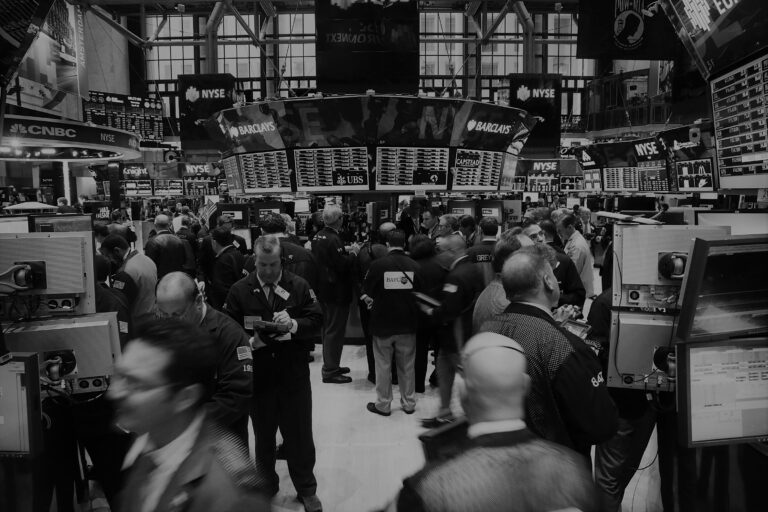